skip to main | skip to sidebar

All My Nice & Talented Students...

Since I have been kept very busy with my shop Draw Me A Lion as well as teaching classes lately, you might have noticed that I haven't had time for my beloved picture book blog. A bit sad, but what can one do... Today instead of featuring a professional illustrator's work I would like to feature this illustration here made by Cally Thompson, a very fun and talented budding illustrator/past student of mine. She had sent it to me back in the Summer at the end of our class and what do you know, I just stumbled upon it again in the mysterious depths of my hard drive. The illustration features all the different characters she developed for various homework assignments in class. A little character montage so to speak. I feel very special indeed:) Thanks right back to you Cally and in fact a BIG thanks to ALL of my awesome students out there, past and present! How is it that I only ever get such bright and talented and nice folks in my classes? What luck:) 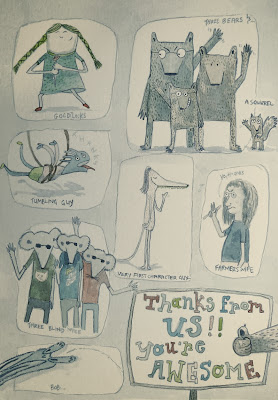 Some weeks back I bought the magnificent picture book Little Bird which immediately became a new favorite of mine after reading it. Pick it up when you have a chance. Definitely a book that will be appreciated on many levels by adults but that can also be enjoyed by kids.

What I love most about the book other than of course the visually amazing illustrations of super prolific illustrator Albertine, is that it's a daring book in that it could easily have been a much different book were the text tailored more along the conventional lines to accompany what the images are telling us in the story. Instead however there are two separate narratives happening at the same time. Together creating a truly beautifully and sophisticated picture book experience.

I love it when you could do the easy thing. But you don't. You take a chance. And in this case, it turns out so worth it. Also interesting here is to wonder how illustrator Albertine and writer Germano Zullo worked together on this book. Did the story/text come first? Or did the images/partially come first and then the story and then the rest of the images...

If you want to read more about the book and see more images of it check out this post about it here on the Brainpicking's blog.

Here is some work from the amazing illustrator Albertine. Check out her website here. 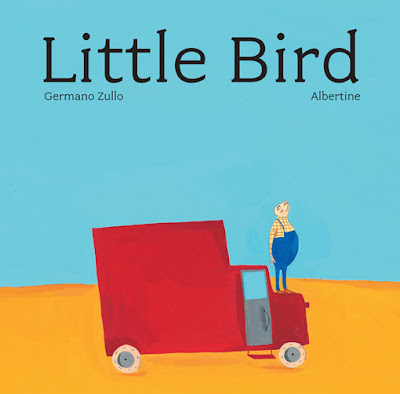 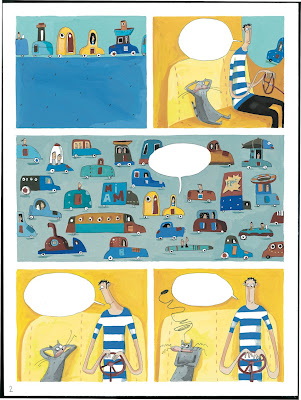 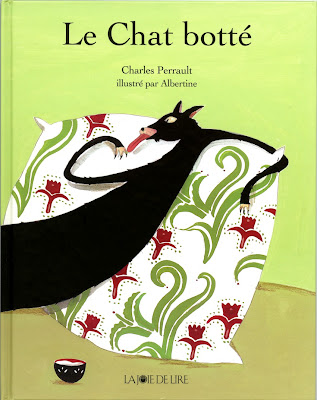 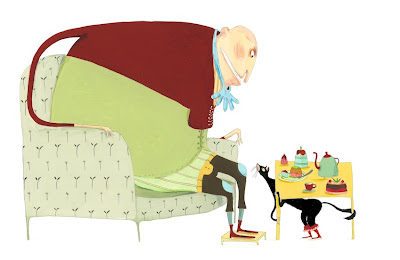 All Images © Albertine
Posted by Lisa Cinar at 5:49 PM 51 comments:

The Strange Poetry of Lilli Carré

Lilli Carré although only just 30 years or so old, has accomplished and produced so much already. I was first introduced to her work when stumbling upon ‘Nine Ways to Dissappear’, a beautiful and compact book published by Little Otsu that tells nine short stories in words and pictures. First drawn to the book for it’s sheer beauty and design I kept reading for the bizarreness and melancholy of the stories. They almost feel as though Carré is just making them up as she writes and draws them out. As if there was no plan, no definite set purpose to them, but that this in a way seems to be the point of them at the same time. A combination of poetry and dream seems to cloak her characters and their worlds. While I think that Carré’s illustration work is beautiful in it’s own right, I believe that the format of the book, her ‘animated drawings’ or animation is where Carré’s work is truly at home. As long as there is more than one page for Carré to work with, to show us the continuation of something she is able to bring a strange kind of poetry to life that is truly unique.

••••••••••
I wrote this article for the great illustration magazine Linea Curve. I will be writing some articles for them every so often and these articles will be cross posted on their blog as well as on I Heart Picture Books. Images chosen to accompany articles may vary.
••••••••••
All Images © Lilli Carré 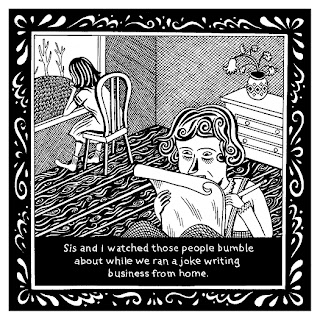 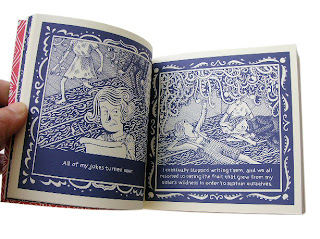 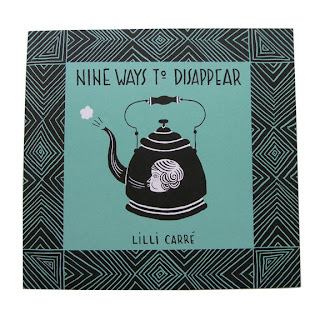 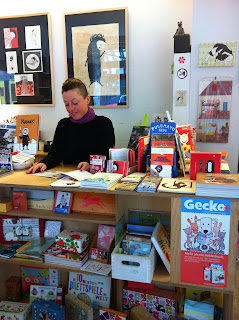 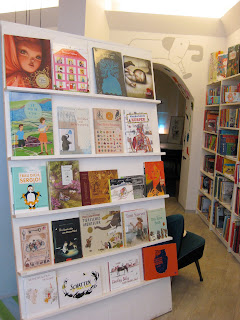 One of the many things I did lately that has caused me not to write for the longest time is to take a little vacation to my home country Germany. I hadn't been for quite some time and so it was even more exciting for me than normally to step inside any given book shop to see what was new. As luck would have it one of the places I had on my long list of things to check out in Berlin was Mundo Azul an International specialty Picture and Kids Bookshop located in one of Berlin's coolest neighborhoods. I've been to quite a few bookshops in my life time but I think this one took the cake. I only had a relatively short time since we had other plans already but I could have easily stayed all day. Not only was the selection of books amazing beyond believe with every single book displayed making you want to open it up and check it out and take it home, but the shop itself was also beautiful, with original artwork from amazing illustrators displayed on it's walls. 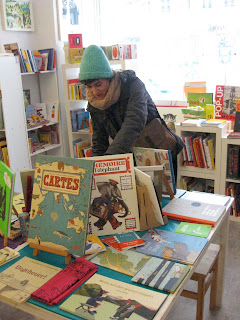 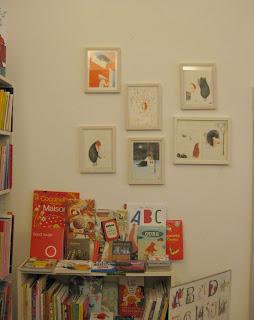 Imagine my surprise as I walked into the next little room and discovered original artwork by non other than Violeta Lopiz (whom I had just written about a few posts previous of this one). I was so excited and it totally made everything about the shop even more magical and perfect. The woman who was working that day was of course amazing and fun and super helpful and it was obvious that she was a big picture book fan herself. So cool! I'm so happy to have found this shop and I hope that it will stay there forever and just grow bigger and bigger. My cousin and his girlfriend whom I was visiting there life very near and it makes me happy to know that they go there to get books for their little boy. I couldn't imagine a better place in the world to get them at!

So yes, if you find yourself in Germany and you love picture books, here is their website .GO THERE! ...but remember that ALL shops are closed on weekends in Germany;) 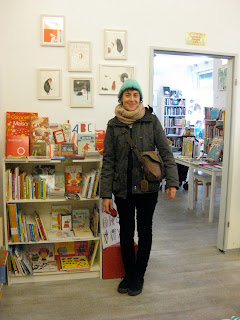 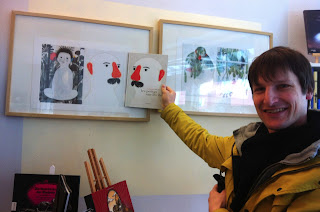 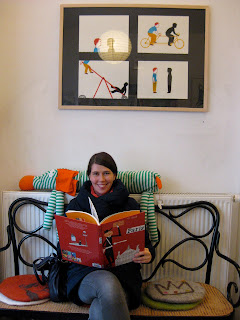 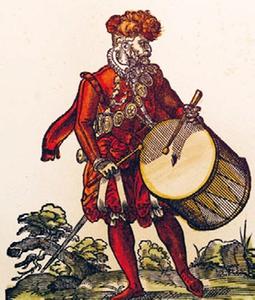 In my level 1 illustration for picture books class, one session is always dedicated to a brief overview of the history of illustration for picture books in North America as well as Europe, since the two are so inextricably linked. I always really enjoy this class since it gives me an excuse to brush up on my existing knowledge of the subject but more importantly and excitingly to add to it. 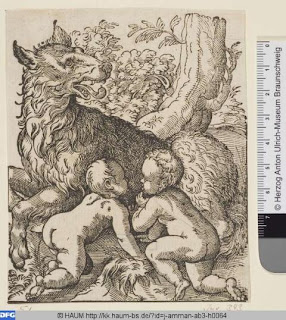 I have taught the class for about two years now and every time I teach it, I like to add a bit to my knowledge of illustration's rich and fascinating history. It's pretty cool to be able to pick up dense scholarly books on the subject and to recognise and know a bit about most illustrators mentioned through out. There was no illustration department at my school when I attended so illustration was not included in my study of art history and everything I know today on the subject is self taught. I think that that's really cool and I'm proud of how much I have learned so far. I also hope that this keeps the class fun and fresh for both, my student and me. I really don't want to become one of those teachers who always teach the class in the exact same way, thus becoming stale and boring. Snorrrrrrrrr... 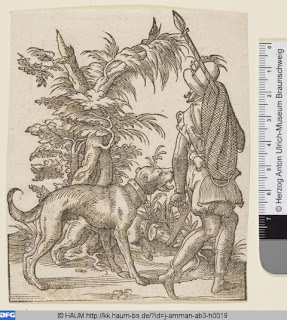 This time around I learned a bit more about one of the quoted many times over first picture books for kids. Namely 'Das Kunst und Lehrbüchlein' (1580) which includes many fine woodcuts by it's creator Jost Amman. I found this very interesting post about this book which talks about the concept behind the book and it's use. Mainly it was supposed to serve as inspiration and example for young (and old alike) artists who were interested in learning the skills of illustration. Back then this would have however not only meant perfecting your drawing skills but also to learn about the different types of woodcut through which the images were reproduced at the time. 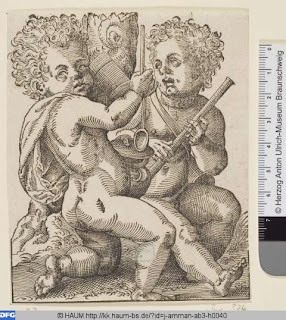 I got a little over excited to begin with when seeing all the images of this instructional and inspirational work for young artists, thinking that it might have served as a colouring book (note the allowance of plenty of white spaces given to most depicted characters) but I according to the previously mentioned blog post it was not. Also one has to consider that there probably were no crayons for kids lying around the houses back in 1580. Back then I would imagine that art materials of any type were only common amongst those in the proffesion of illustration and their apprentices. Having said that, the age that one would become an apprentice was also much much younger than in todays world. 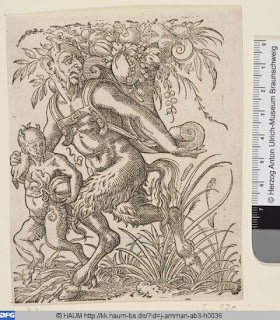 If You'd like to learn more about Jost Amman click here and here. To view the rest of the inside of 'Das Kunst und Lehrbüchlein' click here to enter the amazing German Kupferstich Kabinet database.

The summer break is over and just like that... I have a new favorite illustrator :)
OMG! So fantastic!
Check out her siiiiite!
I am in love 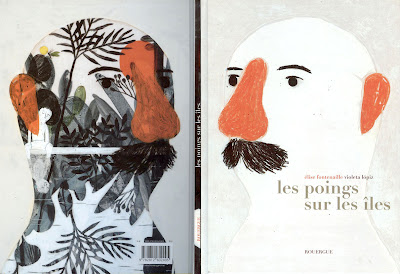 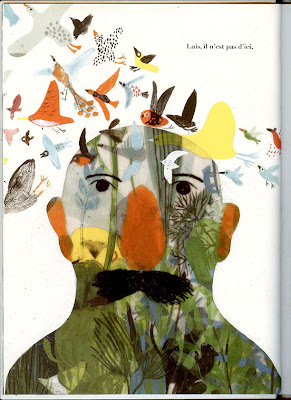 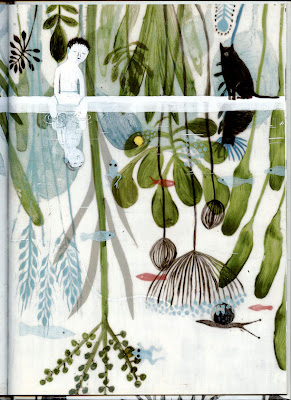 My Advise on Picture Books in Uppercase Magazine 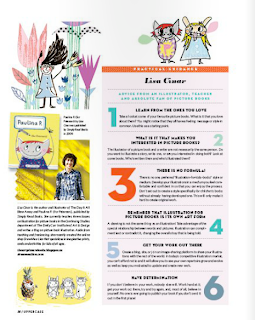 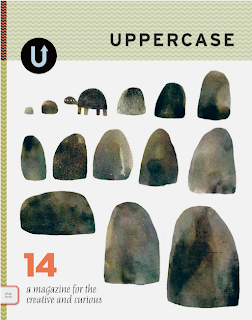 The new Uppercase Magazine is out! The theme is play and included is a healthy dose on the subject of picture books... it just might be my favorite issue yet! And no, it's not just because yours truly was invited to write a few words of advise for budding picture book creators, it's because I'm in such amazing company! There are features on John Klassen, Isabelle Arsenault and Oliver Jeffers (!!!) as well as some awesome advise from amazing publishing houses. And that's just a few of the articles.

As if that wasn't enough for me to be super excited, my friends from Collage Collage and the awesome toy shop Dilly Dally both here from Vancouver also happen to be featured in the issue. So yes, I really couldn't be happier with this issue! Number 14 Ladies and Gents! Go get your copy, check out my advise column and the rest of the magic.
Posted by Lisa Cinar at 2:15 PM 26 comments:

Draw Me A Lion Shop

Lisa Cinar
Vancouver, BC, Canada
Hi! I am Lisa Cinar, a writer, illustrator and overall Fan of Picture Books! This here blog serves as a way for me to catalog, and share my fascination with the art of picture book illustration. I am now also teaching a class on Illustration for the Continuing Education Department at Emily Carr University of Art and Design in Vancouver. This blog also serves as a supplement for this class and to post Homework assignments. Here's to hoping you will get as much out of it as I will. Enjoy. 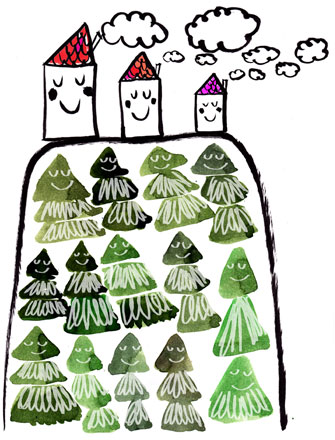 The Day it all blew Away 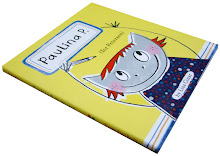 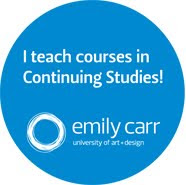 These are Books I recommend as supplementary books for my Children's Picture Book Illustration Class I teach in the Continuing Studies Department at Emily Carr University of Art & Design.
Should you wish to buy these books, I strongly encourage you to purchase them at your local independent book store instead of from Amazon. Our local bookstores are going out of business and need your support!

'How to be an Illustrator' by Darrel Rees

'Words and Pictures' by Quentin Blake

'Drawing for the Artistically Undiscovered' by Quentin Blake and John Cassidy

'What it is' by Lynda Barry

Other Sites & Blogs on Illustration

Some of my awesome past students sites